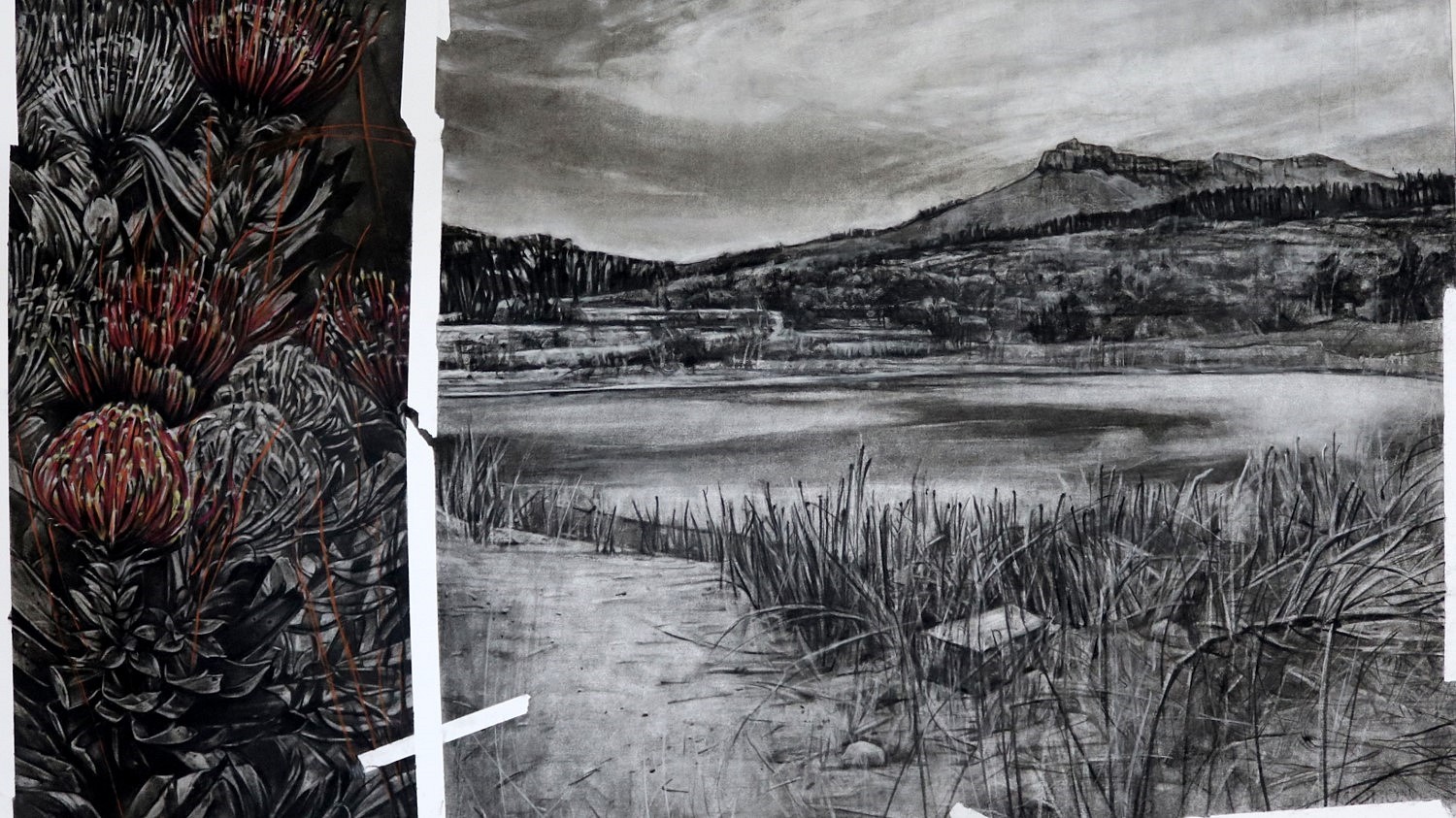 An exhibition of drawings by Corlie de Kock

This exhibition focuses on the art of drawing and specifically of the South African landscape and of female portraits. Corlie de Kock delivers an interpretation of landscape and portraiture in her drawings that could be termed “ecofeminist”.

In this exhibition drawing is emphasised as an autonomous language. Chiaroscuro is a Renaissance technique, where the contrast between light and dark evokes a dramatic atmosphere in visual images. De Kock uses charcoal to create her drawings then erases and re-draws them. Charcoal is thus the metaphor for temporality and drawing symbolizes a dynamic and ever-changing process. These drawings focus the attention on technical ability and the link between the passing of time and value.

The first depictions of the Southern African landscapes and its natural phenomena in the form of drawings on paper can be found in the diaries of 17th century travelers in the Cape. The landscape was measured, mapped and sent to Europe in book form. The drawings contained in these books represent the colonial occupation of the land and later photographs of African women in postcard form were popular in Europe.

Ecofeminism uses the concept of gender to explore the issue of the abuse of power over nature and women and is an underlying theme of this exhibition. The women in De Kock’s portraits are from the African continent, but stand their ground in the world- symbolised by the map on the wall or an ornamental globe within her indoor space. Art generates art and De Kock's female portraits relate to that of seventeenth-century Dutch painter Johannes Vermeer, as she emphasizes the moment of a woman's realization of her own independence. As American author Paul Auster said, “… it is the fullness and self-sufficiency that Vermeer insists upon” (The Invention of Solitude; p. 150).

Thula in silent conversation with Vermeer is a full-body portrait of an urban Xhosa woman in a skirt of lace and satin. She wears a headscarf and pearl earrings and her bare feet are flat and firmly planted on the tile floor. Thula is the name of the model, but it is also a Xhosa word which means ‘silence’ or ‘hush’. Thula is a gentle quiet woman, but her stance is strong, she represents the modern urban African woman. Postcards for the world is a still life with a globe and two old postcards with portraits of African women in the background. These kinds of postcards were based on photographs taken in Africa and then distributed in Europe during the late nineteenth and early twentieth century as collectors' items. It also objectified the African woman as an exotic symbol of exploitation and eroticism. In contrast, De Kock creates a set of larger than life portraits in which the female model is the focal point. Maps and tapestries of maps make up the background.

Indigenous plant species were also analysed and documented by means of drawings during the colonial era. The possession and exploitation of nature over the past three centuries has led to an ecological disaster. South Africa is a country that suffers from recurring droughts and water shortages which leaves people in a constant battle for survival. De Kock refers to this but also gives a positive and romantic perspective amidst the dark, oppressive conditions. In The Clay Dam is almost empty, but the pincushions are in flower  a landscape in black and white is placed next to a depiction of colourful pincushions. Masking tape was used to divide the image surface in two and highlights the incompleteness of the drawing process. The artist also refers to indigenous plant species such as Ghoena Figs(Carpobrotus edulis (L.) L. Bolus - traditionally used by the Koi-koi as a medicinal plant) ,Proteas and the Blushing Bride (Serruria Florida - Blushing Bride is related to the Protea species and one of the most sought after bridal flowers).

The essential sense of the exhibition is expressed in the contrast between light and dark, growth and destruction, nature and culture. The continuous use of the technique and medium of chiaroscuro emphasises and symbolizes the incompleteness of human existence.

Please join us for the opening at 11h00, Saturday 14th March, at Everard Read Franschhoek.